At 1.30pm on Monday September 2nd 2019 the crew of our Doolin Express Ferry spotted something floating in the water on their route to Inis Oirr, Aran Islands. They went to investigate further and found a boat! Later we sent one of our crews and ferry to tow the boat (with the help of a local fishing boat) to the beach at Inis Oirr. Islanders gathered to help bring it up to shore. When we finally got it to the beach that’s when we began to wonder, where had it come from? 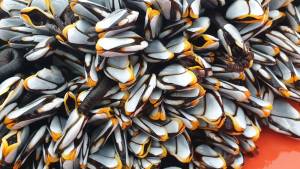 What was quite amazing was that the boat still had two engines attached to it. We could see from the length of the goose barnacles that had grown on the boat that it had been in the water from some time. It was a puzzling mystery for sure and it had everyone wondering what had happened.

Where did it come from?

Our original investigations led us to believe that it was a rapid rescue boat belonging to the US Coast Guard. We launched an appeal on our social media channels for more information. After thousands of shares, national news coverage, and many phone calls, we thought we had a few ideas. You can see more about the attention it gained and read the article written by CNN international news.

After more investigating and phone calls from all over the world, we may had come to a conclusion. We discovered that the boat originated in Norfolk Virginia and is not actually a rescue boat. It is actually a High Speed Maneuverable Surface Targets or HSMST for short. Essentially, they are remotely operated boats and used as target practice by the U.S. Navy! You can check out this video that shows the target practice in action.

We believe the U.S. Navy boat found was built in 2015 and its likely that it was lost during a training exercise. The boat remained in the water drifting across the Atlantic for years. It eventually ended up floating in the water close to Inis Oirr beach and was discovered by our sharp crew of the Doolin Express! How cool is that?! If you are interested in this you may also like the Redbull Cliff Diving event that takes place on Inis Mor.

If you would like to come and check out for yourself this U.S. Navy boat you can book Inis Oirr tickets online here and save up to 30%. We also have a Bus Eireann and Doolin Ferry Company ticket offer available to book if you need transportation from Galway or Limerick City Centres.