When taking the ferry from Doolin to the Aran Islands one of the first things you will see upon approach is O’Brien’s Castle, on Inis Oírr (Inisheer). 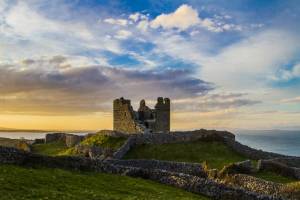 The Castle is located on one of the highest points of the island and grandly overlooks the beach, pier, and ruins below. This castle is thought to have been built in 14th century making it one of the oldest ruins on the Aran Islands. It would pre-date the other ruins in surrounding areas of County Clare such as the Burren Tower Houses and other stone forts on the Aran Islands.

The early Tribal Kingdoms that divided Ireland often competed for resources and were not exactly known for their peace making. It is not surprising that in 1582 the O’Flaherty’s of Connemara sieged and occupied the castle from the ruling O’Brien’s of Munster. The O’Flaherty family was driven west due to the invasion of Norman conquerors but fought ferociously to maintain their influence in the area.

To this day many decedents of the O’Flaherty’s still reside on the Aran Islands. Years later in 1652 the Aran Islands were given up to Cromwellian forces and the O’Flaherty’s defeated. Unfortunately O’Brien’s Castle was taken yet again and this time partially destroyed. The new forces favoured other Island strongholds such as the ring forts of Inis Mór, leaving the Castle to fall into ruin.

When visiting Inis Oírr by ferry you won’t be able to help but take in this magnificent Castle. A trip to Inis Oírr and then joining our Cliffs of Moher Cruise upon the return is our most popular ferry destination. Be sure to check out our Inis Oirr Map and What to do on Inis Oirr before you go.