Inis Mor (Inishmore) means ‘Big Island’ and is the largest of the Aran Islands. It is also the most popular and visited of the three Aran Islands. The size of the Island is about 14 km by 3.8 km and there are about 1,100 people living there today. Its famous rocky landscape here has helped to create its iconic image of flowing fields divided by winding stone walls. Views from this Island reveal a stunning Atlantic gateway from Connemara to Clare.

How long is the ferry to Inis Mor?

Sail with us on our Express Ferry Fleet. The largest, fastest, and most comfortable ferries from Doolin. Celebrating over 50 years in business! 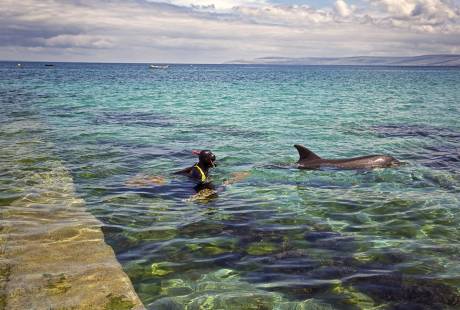 Top things to Do in Inis Mór 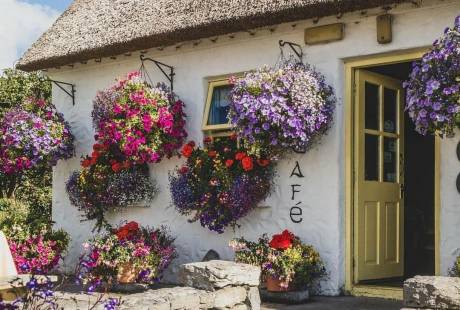 Places to Eat in Inis Mór 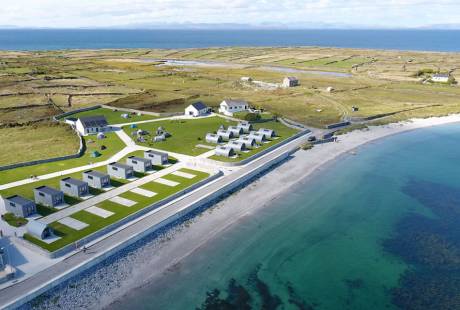 Places to Stay in Inis Mór 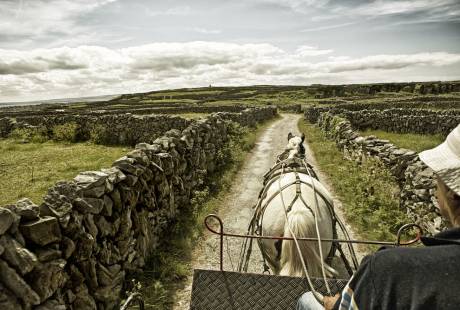 The main harbour Cill Rónáin (Kilronan Village) where the ferry arrives is a bustling port. There are several pubs, restaurants, and cafes. Visitors can travel around the Island by bicycle, mini-bus, and pony & trap tours. After a day of exciting sightseeing there are beaches that ribbon the coastline of Inis Mór where you can enjoy picnicking, fishing, and even have a swim!

The Aran Islands are one of the last places in Ireland that have preserved the Irish language. Life on the Aran Islands is traced back to 4000 B.C. Ancient Christian and Celtic ruins and neolithic tombs such as the mighty Dun Aonghasa and Na Seacht d’Teampaill are evidence of this. Don’t forget that a visit to the Aran Sweater Market in Kilronan or local craft shop is a must. You can take home your very own Gensaí Arainn which never goes out of fashion. In summary Irish culture is alive and well on Inis Mór with nightly music sessions in the island pubs.

How long do you need on the Inis Mor?

You need a full day or about 4 to 5 hours to visit this Island because it’s quite a large island with a lot to see! The guided Island tours are a great option because they will take you around to all the main highlights in good time. So if you plan to cycle be sure to choose your route ahead of time. This way you can plan to have extra time to spend in Kilronan for refreshments, shopping, and soaking up those views of Galway Bay.

Inis Mor has some beautiful beach areas where you can enjoy a picnic, swim, or fish. Trawmore beach is east of Kilronan and next to the airport. This is a long beach on the sea that also has dunes that form an large sand bowl. This coastline is also home to a seal colony. In the small village of Kilmurvey there is also a beach at the Western end of the Island called Kilmurvey Beach. Sea life on the Islands usually takes center stage however there is one particular reptile that many are surprised to learn can be found here. The ‘common lizard’, which is Ireland’s only native reptile is indeed a rare find. These lizards hibernate so they can be spotted around the Island from spring to autumn if you’re lucky.

There are three very small uninhabited islands within the Aran Island group. The Branack Islands are two small rocky islands located near the Western end of Inis Mor. There are two lighthouses on the coast here. One is on Eeragh Island, the most Western of the three. The other is on Straw Island which is on the Eastern side facing Kilronan. So these lighthouses are a welcome sight to ships arriving on the Island.

The main harbour is lined with ferries, fishing boats, and some more traditional boats such as a Galway Hooker or currach. Annual events such as Ted Fest in February and the Patrun (currach racing) festivals in late June take place every year.

There is a Tourist Office located on Kilronan Harbour so it’s easy to stop into them on arrival. They can also be contacted at +353 99 61263. For more details you may also view our Aran Island Maps.

What to Bring Explore Inis Mor

Our first class staff and crew can help you arrange all of your Island needs. If you require help booking groups large or small, please contact us by phone or email and we’d be delighted to help you. We are the Aran Island Ferry from Doolin Est. 1970.

Top Things to do

Meet us in Doolin

Doolin, Ireland is a beautiful seaside village in County Clare with amazing scenery in all directions. It’s located close to the Cliffs of Moher and Aran Islands Ferry, so it’s ideal for a day trip, overnight, or extended stay. There is so much to do nearby therefore Doolin is one of the best places to visit on the Wild Atlantic Way. The village is located less than one hour from Shannon Airport and 1.5 hours from both Galway and Limerick City Centres. In short you can enjoy all the benefits of the charming West Coast of Ireland without ever being too far away. 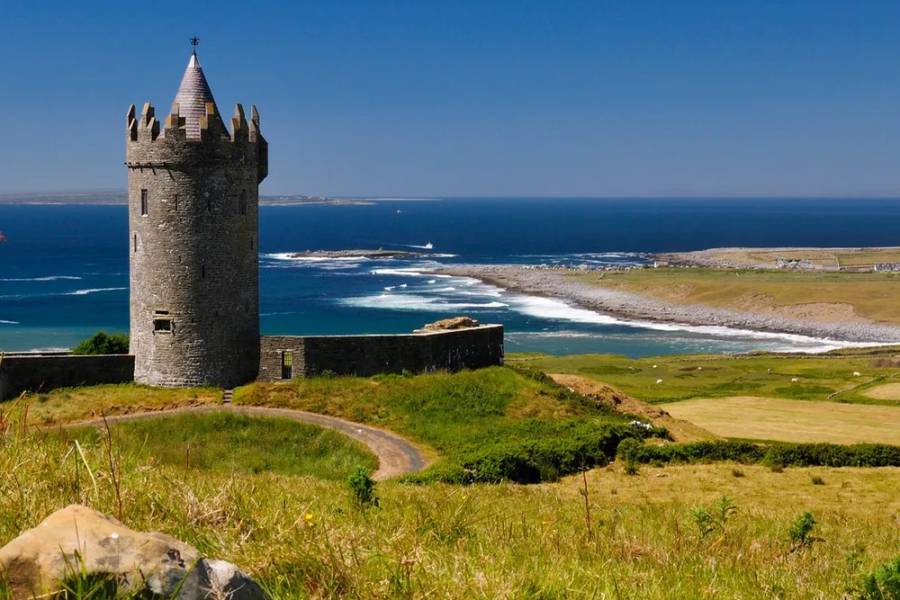