The Aran Islands are a top destination in the West of Ireland. These beautiful Islands display Irish Culture at its best in many traditional forms. From winding stone wall boreens, beaches lined with fishing boats, to the craic of the local pubs. When you arrive to Aran you instantly feel like you’ve been taken back to Ireland of Old. Gaelic (Irish) is the main spoken language and backbone of life on these Islands today. Though most Islanders speak English too, Irish is still the preferred language by far.

You can escape to a place lost in time when you take a trip to Aran.

Location of the Aran Islands

They are located about 48 km from Galway City, however they are only 8 km from Doolin Pier, Doolin, Co. Clare. Inis Oirr (Inisheer) is the closest Island to Doolin. There are three islands to choose from when planning your trip. Each one is well worth a visit and will not disappoint. However, we do understand you need to make some choices when planning. Depending on which Island you visit it takes about 15 minutes to 35 minutes to get from Doolin to the Aran Islands by ferry.

Which Aran Island to visit by Ferry?

We have you covered for all the information on what to do on your trip. Simply click on the island that you are planning to visit and explore. You can enjoy everything from beautiful walks, bike trails, fishing and swimming, to camping, glamping and fine dining.

We have all you need to know about accommodation, transportation, and what to see and do on The Aran Islands. 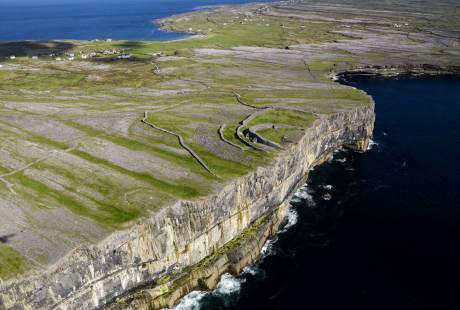 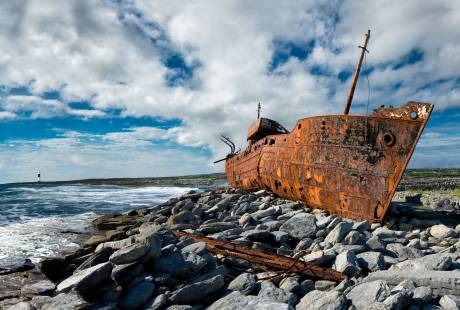 These Islands are a celebration of Irish language, culture, history, and music. You can find an amazing display of some of the oldest archaeological remains in all of Ireland such as the world famous fort Dun Aonghasa on Inis Mor. It’s all there from castles, prehistoric forts, ancient church ruins and dwellings, to holy well’s visited by its first settlers. As shown in Robert J Flaherty’s 1934 film ‘Man of Aran’, life here hasn’t always been easy. But with that resilient Irish spirit and grit, life on these Islands has persevered and thrived over centuries.

The Islands have a distinct character and life is slower here, a sanctuary from modern life. Aran Islanders preserve their traditions with great dedication while at the same time welcoming visitors to experience it. The thatched cottages and dry stone walls throughout the Islands are examples of this dedication to traditional Irish craftsmanship. No other item conjures up Irishness like the Aran Jumper (Geansaí Arainn). Irish Craft shops can be found on all three Islands. Be sure to take home your very own Aran Jumper from a local craft shop or the Aran Sweater Market.

Music can be enjoyed almost every night in the traditional Irish pubs. Therefore if you’re looking to meet some locals and practice your Irish- this is the place to be.

Famous for their wild landscapes and off the beaten track roads, these Islands never fail to wow. The three islands were once ‘one’ with the famed Burren Region, in County Clare. They are located just west off the coast of the Burren and are separated from it by the South Sound. They have most likely been separate islands for 8,000 years. Likewise with the Burren, they are a unique place of ecological significance. It is the only place in the world where plants from the Arctic, Antarctic, and Mediterranean all grow in the same area.

The rich wildlife of the Islands is also another reason to visit. The local wildlife such as seal colony’s, dolphins, and basking sharks are something to keep watch for on your visit. In addition close by on the Cliffs of Moher is one of Europe’s largest sea bird colonies. So the Islands are also a bird watchers paradise.

Immortalised in Irish hearts forever is the famous BBC series, ‘Father Ted’. This wildly popular television program brought Aran Islands and traditional West of Ireland culture to global audiences. Father Ted fans can visit the very places this iconic series was filmed such as the Plassey Shipwreck on Inis Oirr, and most importantly our very own ticket office on Doolin Pier!

How to get there?

You can get to there by ferry from Doolin Pier, Doolin, Co. Clare. Doolin Ferry Co. operates March to November, 7 days a week (Bank Holidays included). Our new Express Ferry service from Doolin offers the fastest sailing times to the Aran Islands.

How long does it take to get there?

How much is the ferry to Aran Islands?

In short we have Family tickets, Student, and Senior rates to all three Islands available. Please note you can not visit all three in one day. You would need to stay over night on any Island to have enough time to visit more than one, why not?

© Copyright Doolin Ferry 2011 - 2022
Close
We use cookies to ensure that we give you the best experience on our website. If you continue to use this site we will assume that you are happy with it.AcceptDeclineCookies Policy
You can revoke your consent any time using the Revoke consent button.Revoke consent